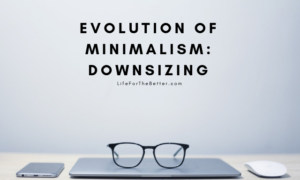 ***Author’s Note: This was written prior to L’s move.

Tim and I discussed chronicling our experience of going tiny every step of the way. We are moving into the tiny house at different times. I live and work in a moderately large city. He is in a more remote location and living in the tiny house by himself at the moment. We are living in spaces that are our own and on our own.

Moving from my 490 sq. ft. studio apartment meant purging. I’m talking five trips to Goodwill purging – 10 bags purging. I mean getting rid of half my clothing purging – and selling all my furniture purging (except the bed – I will not part with supreme comfort). I haven’t had a purge since going to college. There is SO MUCH STUFF!

After exhausting my efforts of getting rid of what felt like just about everything, I felt like my Jeep was too full. I couldn’t see out the back window. I unloaded, discarded a handful of items. I reloaded. Better. But still, more needs to go. And it will.

Why do I have so much stuff? We ask ourselves that every time we move. One person I spoke with about this told me that when he and his wife moved into their home, they had an idea of what it would look like, based on how it had been staged when they had toured. He recalled seeing two huge semis thundering down the road to their new home and thinking about how much crap they actually had, as opposed to the simple model home they had envisioned.

Getting my bathroom items to fit into one box was a process. I started with my move from a one bedroom to a studio. I got rid of at least half of it.

Honestly, was I ever really going to use the cream that was supposed to make my feet super soft? Or the high-end face cleanser that my friend gave me? Probably not. Out. I managed to fit it all into one small bin. And I’ll go through it again when I arrive.

I expect to purge another quarter of my things by the time I get to the tiny house. Either the items won’t fit, or I’ll have forgotten about them and they won’t serve a purpose important enough for me to retain them. 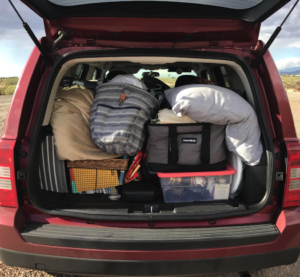 My kitchen stuff was harder to part with. I am a little bit emotionally attached to certain mismatched mugs. I cook a lot and felt sad to part with casserole dishes that have held many a good meal.

I tossed any and every spice that was expired (a dozen, if I’m being honest). I told myself that harder-to-part-with kitchen items were not serving a purpose for me anymore. Then when I dropped them off at Goodwill, I told the collections employee that someone else would be able to use these items. I felt a surprising sense of new purpose. That was the point after all, right? I got my receipt and didn’t look back.

The Toll of Purging

The amount of purging was absolutely exhausting. I am shocked at how much it took out of me to go through the seemingly small number of items that I had accumulated in a studio – mind you, all the while intentionally not taking more items in during that time. Tim has a personal rule that if you buy a new item, you must get rid of two items.

What Else Do I Need?

You know what? So far, I don’t miss my stuff. I am staying with family for a week before departing for tiny house living with Tim. In my temporary room, I have a small bin of valuables, a jar of cash that needs to go to the bank, my work bag/computer, my camera for upcoming sessions, and my bag of clothing and essentials.

It’s too much. It’s stressing me out. But they’re my necessities. Do I really need much else?

I’m wondering if I should just tell Tim that all I need is us and throw everything aside from my current essentials. Then we could ride off into the sunset with John Mayer bumping on the stereo. Yeah, probably not. But yes to the further purging and yes (duh) to the John Mayer. 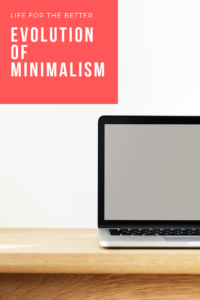 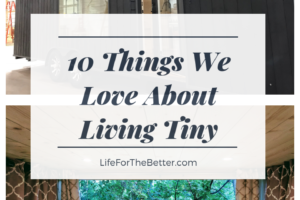 10 Things We Love About Living In A Tiny House 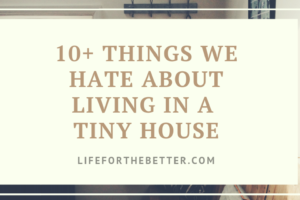 10+ Things We HATE About Living in a Tiny House 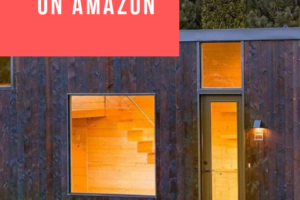 15 Tiny Houses You Can Buy On Amazon